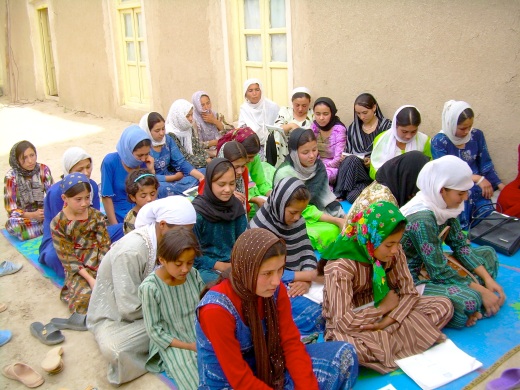 A Barakat Literacy Course for Women in Afghanistan

After four years, Taj Mohammad, his wife, and his eight children have grown accustomed to living in close quarters at Charahi Qambar, a refugee camp in Kabul, Afghanistan. The camp provides shelter for 900 families from war-torn areas, mostly from southern Afghanistan. Charahi Qambar is just one of 52 refugee camps in the province. Living in camps is challenging; many refugees live off of $6 a day or less, have no access to heat and very little access to water and food. They do, however, acknowledge one positive difference of life at Charahi Qambar: the opportunity for their children, especially girls, to attend school.

“I did not know that girls could go to school, because in my village only a very few girls were taught anything and it was always at home. I thought, ‘Maybe these are the daughters of a general,’ because where I come from, women do not leave their homes, not even to bring water,” said a male camp resident from Helmand, Rahmatullah, according to a NY Times article. Shortly after arriving to the camp, he and his wife agreed to send their daughters to the camp school. His girls are now in a regular Kabul school.

Eight hundred students attend the camp school at Charahi Qambar and receive daily lunches. The school’s goal remains to bring children up to a level where they can keep up in regular Kabul schools. However, international aid has been steadily decreasing since the US has announced its plan to pull troops, and funding for many of these educational programs and schools is being cut. It remains to be seen how educational programs for children (especially girls), will be sustained after the US pulls out of Afghanistan in 2014.

Thankfully, there are programs rooted in communities, such as Barakat’s schools and literacy programs in northern Afghanistan that are successful and sustained, regardless of US presence. One solution to increasing access to education, particularly for girls and women, could be that donors in developed countries support schools and programs that have deep connection to their communities, much like Barakat. This will ensure that the important work of educating and empowering those who need it the most can continue despite the US pulling out from Afghanistan.

Check out our Photo Gallery